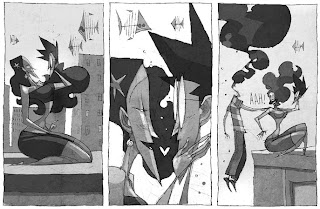 - most popular artists (old ones, and new ones, like you or ramos or sandoval)

Without any doubt, Humberto Ramos is the most known artist outside Mexico. More as a penciller than as an author (so far). There's José Ladronn. He has worked with all US majors and with Jodorowsy for Humanoids & Metal Hurlant. A real veteran, on the Gimenez/Moebius line. In the authoral thing -based on the artists I know- I can name Tony Sandoval with some books around Europe. And Bachan, who made the art for "Nirta Omirli" books for France (with Morvan for Humanoids). Many other mexicans work outside the country, but mostly for the US industry. Some super-hero pencillers, colorist, inkers... It's a long list.
Me?? I just pretend to be an "international artist", not exclusively around comics.

- any national heroes? or superheroes? :)

Some decades ago appeared the "Luchadores" in the mass media. Even today, "Lucha Libre" (mexican wrestling, with their masks and their parallel universes) is the closer thing we have to "local heroes". I guess in Europe you can identify some of those masked kitsch characters.

We have some strong comic tradition back from the 50's. "La Familia Burrón" (Gabriel Vargas) is a good example. It portrayed the average mexican family reality. Or the "Supermachos" (Rius)... almost on the same mood. Very local issues. On the superhero thing we always have been duplicating the heritage from the US comics and never been really succesfull on it (in my own opinion). On these days, "El Bulbo", by Bachan, is the best approach we have. An electronic device with cape and superpowers trying to make a living as a freelancer middle-class superhero. Lots of humor involved.

- and the same thing, but from abroad

Marvel, DC, Image, Dark Horse, etc. I believe there is a heavy market in this country for the US action stories. The same goes for manga, with a wider angle on subjects and stories, but foreign in the end...
For a narrow public, we also enjoy some "non-hero" comics from asians, canadians, americans, latins and european authors. As any reader from the globe. We also enjoy comic-strips thanks to Sunday Sections on newspapers. Everybody knows and love Mafalda, Peanuts, Calvin & Hobbes...

- how many professional publishers you've got there

On the local comics part, just one or two. For import products, three at most.

- is there some kind of comic-book underground, with independent comicbooks, magazines?

Sure, strong as ever. There are many author creating independent fanzines and web-comics. The ultimate shelter for authors in a country with no real qualified support for the ninth art.

- are there any comic book magazines with journalism section, with reviews etc

Yeah, there are some. It's understandable they cover mostly imported material. Every week is full of news to tell on the manga/superheroes world! On the local comic production, not so often. And -in some cases- this publications give drawing/artistic advises for amateurs and newcomers. And they publish some independent authors as well.

- are there any comicbook convents (how many? the most important one? how many ppl visiting these events)

I'm not very informed on that matter. I must say that if there was a convention for my interests, that event don't exists anymore (CONQUE was called). On the videogame, "cosplay", RPG, toy and manga thing, I'm sure we have many... All years and in all the big cities of the nation. Very succesful among the young & the geeky (laughs).

Not much as in Eastern Europe. We had (and have) some heavy left-winged messages on the printed press. Considering this has been a country with no dramatic social/regime changes since Mexican Revolution (1910), the government allows freedom of press and freedom of speech. For sure we have had some nasty episodes in the past and some "democratic transitions" in the last decade, but I think Mexico is a free country (overall) during the past 100 years. The "real effect" of social propaganda in mexican society is another matter...